The Resurrection Released a Power 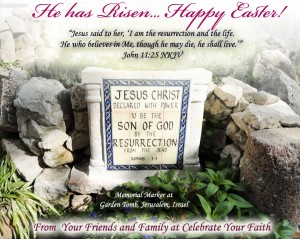 “Jesus said to her, ‘I am the resurrection and the life. He who believes in Me, though he may die, he shall live.”” John 11:25 NJKV

While listening to a recent message by Jack Hayford on the “Spirit Formed” broadcast, I heard him describe Easter in this way…

The whole message of Easter is not that there was an event. The whole message of Easter is that Easter released a power that guarantees to everyone who will come to Him that there is a force that will reverse any situation that looks like its been a set up for a put down…to reverse everything in our lives that looks dead. But there is no promise of a schedule, of a schedule that will suit us.

Easter released a power into our lives that is available to us every day. Jesus is ever-present with us and He’s given us the Holy Spirit to forever abide in us. He is “the Resurrection and the Life” (John 11:25). When we believe in Him, life is present ALL THE TIME. There is a constant release of divine life and grace that’s always there for us.

We need to not only be conscious that it is there, that HE is there, but we need to RECEIVE this power so it can work in our lives. God will never force His will upon us, but His will for us is always for life and health and fulfillment.

If there is any area of your life that seems “dead” as we celebrate Easter this year, look to Jesus and receive His life-giving power for that situation. Receive His wisdom as your answer. Receive His strength to continue on the journey. Receive His deliverance.

Simply say, “Thank You, Jesus, for Your resurrection power that is available me to today to breathe Your divine life into my situation. I receive from You this free gift of power and declare that it will infuse my situation with life. Thank You for reversing anything that looks like a put-down in my life, for promising to turn it around for my good, and for using it to bring glory to the Father. I trust You and look to You as the source of the answer for every problem I am facing. In Your Precious Name, Amen.” 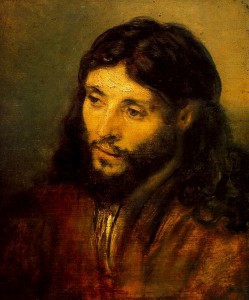 See, my servant shall prosper;
he shall be exalted and lifted up,
and shall be very high.

Just as there were many who were astonished at him–
so marred was his appearance,
beyond human semblance,
and his form beyond that of mortals–
so he shall startle many nations;
kings shall shut their mouths because of him;
for that which had not been told them they shall see,
and that which they had not heard they shall contemplate.

Who has believed what we have heard?
And to whom has the arm of the LORD been revealed?
For he grew up before him like a young plant,
and like a root out of dry ground;
he had no form or majesty that we should look at him,
nothing in his appearance that we should desire him.

He was despised and rejected by others;
a man of suffering and acquainted with infirmity;
and as one from whom others hide their faces
he was despised, and we held him of no account.

Surely he has borne our infirmities
and carried our diseases;
yet we accounted him stricken,
struck down by God, and afflicted.

But he was wounded for our transgressions,
crushed for our iniquities;
upon him was the punishment that made us whole,
and by his bruises we are healed.
All we like sheep have gone astray;
we have all turned to our own way,
and the LORD has laid on him
the iniquity of us all.

Who could have imagined his future?
For he was cut off from the land of the living,
stricken for the transgression of my people.
They made his grave with the wicked
and his tomb with the rich,
although he had done no violence,
and there was no deceit in his mouth.
Yet it was the will of the LORD to crush him with pain.

When you make his life an offering for sin,
he shall see his offspring, and shall prolong his days;
through him the will of the LORD shall prosper.

Out of his anguish he shall see light;
he shall find satisfaction through his knowledge.
The righteous one, my servant, shall make many righteous,
and he shall bear their iniquities.

Therefore I will allot him a portion with the great,
and he shall divide the spoil with the strong;
because he poured out himself to death,
and was numbered with the transgressors;
yet he bore the sin of many,
and made intercession for the transgressors.

And the multitudes that went before, and that followed, cried, saying, Hosanna to the son of David: Blessed is he that cometh in the name of the Lord; Hosanna in the highest. (Matthew 21:9) 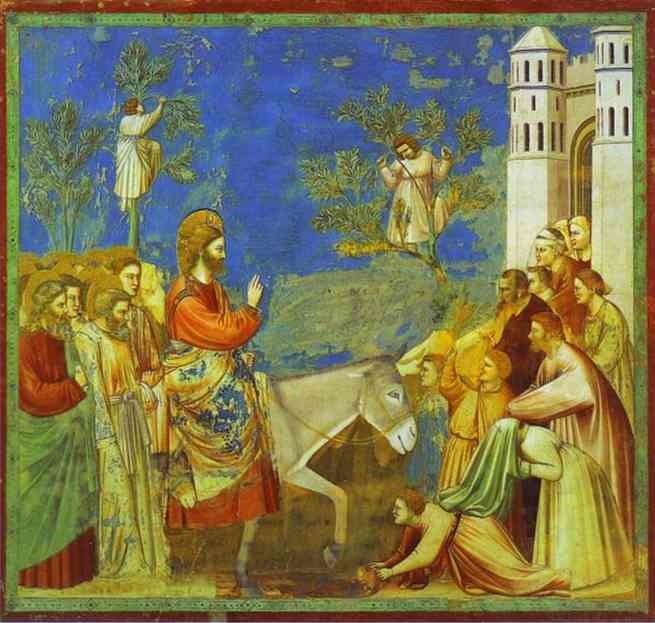 Palm Sunday is the last Sunday in Lent, and celebrates the triumphant entry of Jesus into the City of Jerusalem for  Passover. According to the Gospels, Jesus entered riding upon a donkey, with the multitude spreading their cloaks and laying palm branches on the ground to honor his arrival as their long-awaited Messiah.

The donkey, or domesticated ass, was a symbol of peace. The laying of palm branches symbolized a king or leader arriving in victory. This was a fulfillment of a prophecy of the prophet Zechariah (Zechariah 9:9).

There are many Christian traditions honoring this historic event, to remind all believers of its significance.

According to the the Orthodox tradition,

With palm branches in our hands, we identify ourselves with the people of Jerusalem, together with them we greet the lowly King, singing Hosannah to Him. But what is the meaning of this today for us? First, it is our confession of Christ as our King and Lord. We forget so often that the Kingdom of God has already been inaugurated and that on the day of our Baptism we were made citizens of it and promised to put our loyalty to it above all other loyalties.

The branches in our hands signify, therefore, our readiness and willingness to follow Him on this sacrificial way and our acceptance of sacrifice and self-denial as the only royal way to the Kingdom. And finally these branches, this celebration, proclaim our faith in the final victory of Christ. His Kingdom is yet hidden and the world ignores it. It lives as if the decisive event had not taken place, as if God had not died on the Cross and Man in Him was not raised from the dead. But we, Orthodox Christians, believe in the coming of the Kingdom in which God will be all in all and Christ the only King.

In the Roman Catholic celebration of Palm Sunday:

This ceremony is intended to represent the entry of Jesus into that Jerusalem of which the earthly one was but the figure–the Jerusalem of heaven, which has been opened for us by our Saviour. The sin of our first parents had shut it against us; but Jesus, the King of glory, opened its gates by His cross, to which every resistance yields. Let us, then, continue to follow in the footsteps of the Son of David, for He is also the Son of God, and He invites us to share His kingdom with Him. Thus, by the procession, which is commemorative of what happened on this day, the Church raises up our thoughts to the glorious mystery of the Ascension, whereby heaven was made the close of Jesus’ mission on earth. Alas l the interval between these two triumphs of our Redeemer are not all days of joy; and no sooner is our procession over, than the Church, who had laid aside for a moment the weight of her grief, falls back into sorrow and mourning.

And for Protestant/Evangelical Christians,

[E]vangelical churches that have tended to look with suspicion on traditional “High-Church” observances of Holy Week are now realizing the value of Holy Week services. . .  This has a solid theological basis both in Scripture and in the traditions of the Faith.

Dietrich Bonhoeffer, the German theologian who was executed by the Nazis, wrote of the Cost of Discipleship and warned of “cheap grace” that did not take seriously either the gravity of sin or the radical call to servanthood: “When Jesus bids a man come, he bids him come and die.”

It is this dimension that is well served by Holy Week observances, as they call us to move behind the joyful celebrations of Palm Sunday and Easter, and focus on the suffering, humiliation, and death that is part of Holy Week. It is important to place the hope of the Resurrection, the promise of newness and life, against the background of death and endings. It is only in walking through the shadows and darkness of Holy Week and Good Friday, only in realizing the horror and magnitude of sin and  its consequences in the world incarnated in the dying Jesus on the cross, only in contemplating the ending and despair that the disciples felt on Holy Saturday, that we can truly understand the light and hope of Sunday morning!

As we come to the end of this Lenten season, we at CelebrateYourFaith.com pray that you are touched by God during your remembrance and celebration of Holy Week!