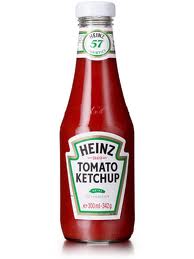 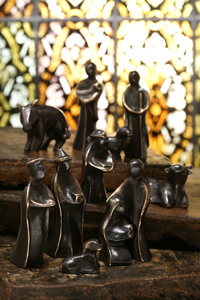 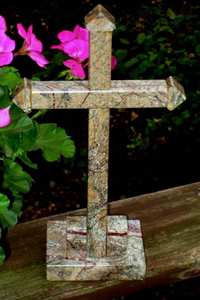 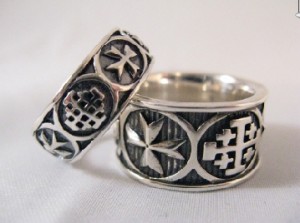 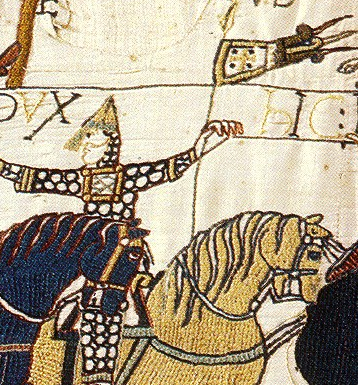 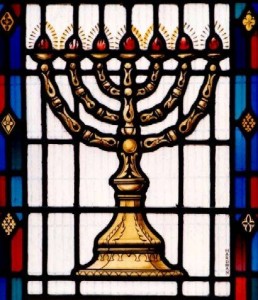 The Chi Rho or “soldier’s cross”

Chi and Rho are the first two letters of  the word Christos (Christ) in Greek – ΧΡΙΣΤΟΣ.  The Chi Rho is sometimes called the Monogram of Christ or Chrismon; it is also known as labarum – the soldier’s cross.

The origin of the Chi Rho is generally attributed to the Roman emperor Constantine. According to the early church father Eusebius,

On 28th October 312, before the Battle of the Milvian Bridge, Constantine  “…saw with his own eyes, up in the sky and resting over the sun, a cross-shaped trophy formed from light, and a text attached to it which said ‘By this conquer.’ ”

He saw the shape of a flaming cross,  “a long spear, overlaid with gold. . . “on the top of the whole was fixed a wreath of gold and precious stones, and within this the symbol of the Saviour’s name, two letters indicating the name of Christ by means of the initial letters, the letter ‘X’ intersection ‘P’ at the centre.”

“The emperor constantly made use of this sign of salvation as a safeguard against every adverse and hostile power, and commanded that others similar to it should be carried at the head of all his armies.”

There are alternative theories of the origin of the Chi Rho, most based on modifications of pagan symbols.  But regardless of its exact origin, the fact is that there is no record of the Chi Rho being used before Constantine, and it became a commonly used Christian symbol after that, especially by soldiers.  After the fall of Rome, the “soldier’s cross” came to represent spiritual warfare as well.

Here is an image of the Chi Rho marking Christian tombs in the catacombs:

On a 5th-century bishop’s gravestone: As a monogram in the illuminated Book of Kells produced by Celtic monks about 800 AD: In contemporary liturgical use:

The Chi Rho has been stylized any number of ways over the centuries. Sometimes the P is formed to accentuate its appearance as a sword handle. Sometimes it is formed to look like a shepherd’s crook, to emphasize Jesus as the Good Shepherd.

The Chi Rho is even encoded in Unicode and can be made on a computer keyboard!  It is encoded at U+2627:  ☧

The Chi Rho is a wonderful symbol with a long history of faith, and its origins make it particularly appropriate for men.   See all the Chi Rho items available at CelebrateYourFaith.com.

The Tree of Life

Many cultures and religions claim some type of symbolic tree which may be referred to as the Tree of Life.  Trees are a unique and powerful symbol of growth as they are the only living things that continue to grow throughout their lifespan.

The Bible talks about the Tree of Life from Genesis to Revelation and several places in between.  The Biblical Tree of Life represents the immortality of the soul, or something with health-giving, heartening, or life-affirming properties.  And of course the tree is the source of wood, which was used to decorative and symbolic effect in the building of the Ark of the Covenant and the Temple.  In areas of the world that are hot and dry, the shade provided by a tree can literally mean the difference between life and death.

The Tree of Life has provided inspiration for artists for hundreds of years. Some examples are this tempera on panel which was probably done for an altarpiece: 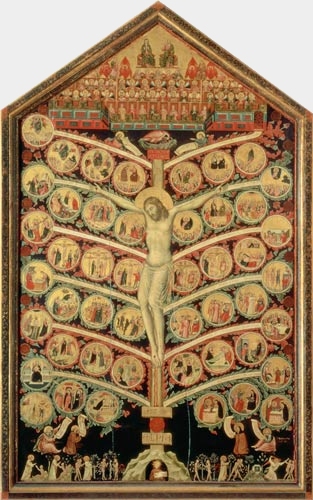 Another example of the Tree of Life can be seen in this stained-glass window in St. Peter’s Church in Firle, Sussex (England). Window at St. Peter's Church courtesy of UGArdener on Flickr

From a frieze in the Palais Stoclet in Brussels, Belgium by Austrian symbolist painter Gustav Klimt: 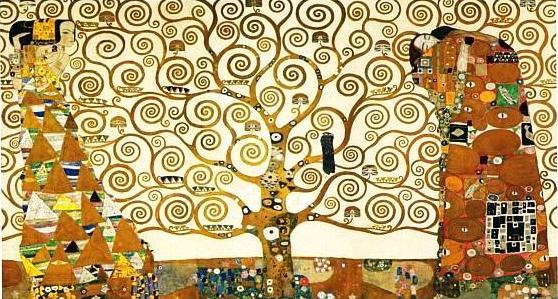 Tree of Life by Gustav Klimt

And this Panamanian mola (a form of textile folk art): 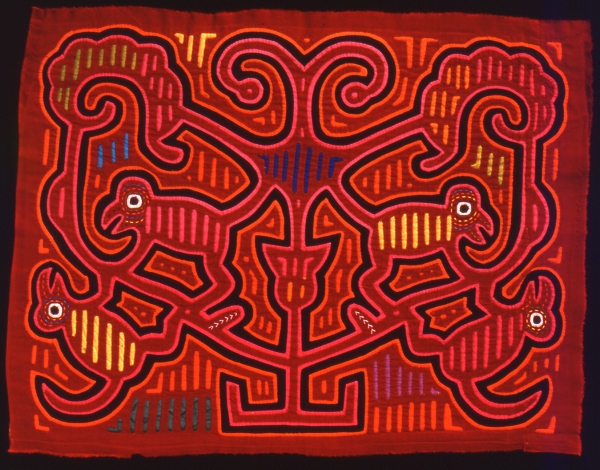 The Celtic cross (a Latin cross with a circle connecting the arms of the cross) was a regional variation of the Christian symbol, born out of the cultures of the newly converted peoples of the British Isles beginning in the 5th century A.D.

Some think that the Celtic cross evolved from conventionalizing the Chi-Rho symbol (the “monogram of Christ”) used first by the Emperor Constantine, who established Christianity as the official religion of the Roman empire. But a more romantic  and equally believable story of the Celtic cross’s origin comes from an Irish legend.

As the story goes, St. Patrick, while preaching the gospel, observed a sacred standing stone of the pagans, marked with a circular symbol of the moon goddess. Patrick made the mark of a Latin cross through the circle and blessed the stone, thereby creating the first Celtic high cross.

After the collapse of the Roman empire, it was primarily Irish missionaries who spread the gospel throughout the British Isles and into northern Europe. There was a significant difference in the approaches of Celtic vs. Roman missionaries; the Roman missionaries focused on the conversion of kings and other leaders who were politically influential, while the Celtic missionaries sought to convert the common people. Irish missionaries established many religious settlements in Gaul (which includes modern France, Belgium, the Netherlands, Germany, and Switzerland). The newly converted Celts of Gaul then created their own distinctive variations on the Celtic cross.

Whatever its precise origins, the Celtic cross is a beautiful and highly recognizable symbol of the faith of the Celtic Christians expressed through their artistic and cultural traditions.  We are very happy to have found a source for hand-cast replicas of Celtic stone crosses. They are a beautiful way to express both faith and heritage.

View our selection of Celtic stone wall crosses on CelebrateYourFaith.com.

Thelma Rynes, a devoted Christian, was having a restless night.  She was angry and upset about some things in her life, was even questioning her faith, and prayed for God’s guidance.  She slipped out of bed so her husband could get some rest.  Stretching her arms, she caught a glance of herself in the mirror.  “What do you see?” asked a quiet voice.  She gazed through the darkness at a faint outline of her reflection.  “I see a cross” she answered.  The loving voice replied, “Then pick it up and follow me”.

Thelma felt overcome with understanding, acceptance and a sense of resolve.  She got back into bed and slept.  The next morning Thelma awoke feeling compelled to sit down and draw something.  She sketched this cross and tucked it into her Bible, where it remained for almost 25 years. 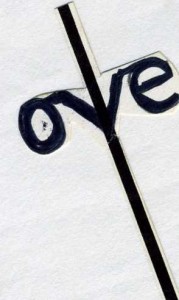 More than two decades after that night, Thelma told her story to John Strobel, a friend of her daughter’s, and showed him her original drawing. John’s faith and his product marketing experience were both ignited by the simple yet profound symbol Thelma had drawn. Neither he nor Thelma was sure what to do with the design; Thelma’s only instruction to John was that “it in all ways glorify the Lord”.

John first began developing ornamental wall crosses based on Thelma’s drawing.  Hans Allwicher, a Master Goldsmith born in Germany, saw a wooden Love Cross in a Christian bookstore in Georgia, and felt its great potential for being interpreted in gold and silver jewelry.  Hans made the connection with John, and The Love Cross line of jewelry was born.

On Thelma’s 80th birthday, John surprised her with a gold Love Cross pendant that Hans had made.  Thelma, who had been severely weakened by cancer treatment, cried tears of joy when she saw how her design had “come to life” in such an artistic way.

We are blessed and privileged to carry this beautiful line of jewelry, which so clearly speaks to God’s love for us.  Each piece of The Love Cross jewelry is uniquely hand carved or fabricated by hand, of either 14k yellow or white gold or sterling silver.

You can see The Love Cross collection here on CelebrateYourFaith.com.